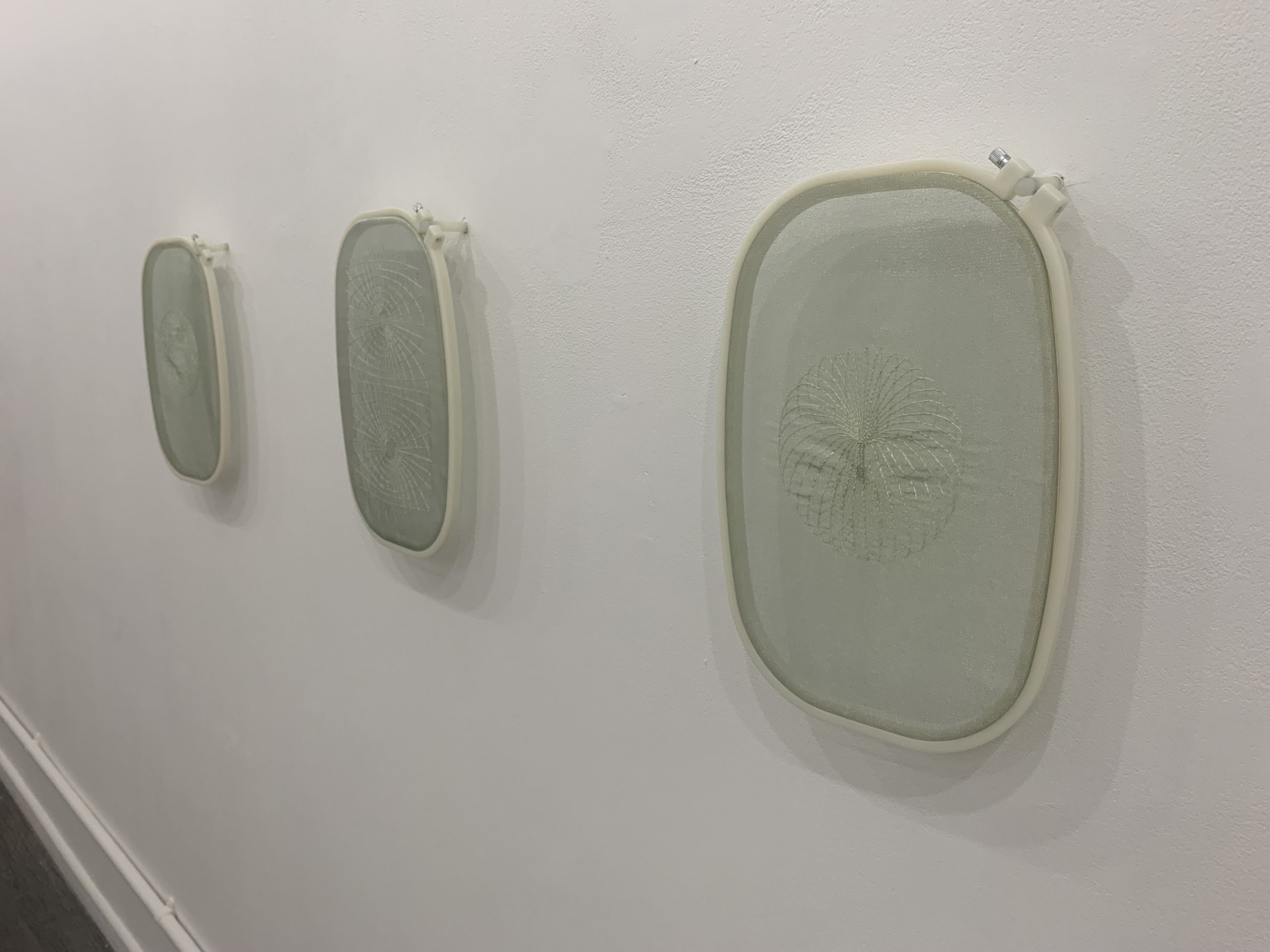 In my practice working with fashion and textiles, I like to think of my work as a series of spatial transformations: “First there is the transformation of the thread from 1st to 2nd dimension, as it is woven it into a two-dimensional plane of warp and weft. The work of patterning and cutting then configures pieces of textile plane into a three-dimensional form. Finally, there is the fashion form itself, embellished and stylized, embodied and moving on the human form, where it functions as a manifestation of spacetime. Fashion in its very temporality and ephemeral nature is a determinant for time. Historical dress transports us into the past; sci-fi costumes offer us an alternative to linear, progressist models of time.” My contribution to my members gallery exhibition Earthling at Modern Painters New Decorators is part of a series of works exploring these spatial transformations that culminate in a historical sci-fi spacetime-travel suit.

“Isotropic Space deals with the slippages, errors, and discrepancies of making sense of the world by fitting it into rational frameworks. Based on the definition of isotropy as the condition of uniformity in all orientations, Isotropic Space draws out how cartography and art use common visual-mathematical frameworks that rationalize highly isotropic environments – the plane of a canvas, the aerial view from a plane flying over the Antarctic plain. The grids deployed in isometric projection methods shared by cartography and linear perspective act as mechanisms for dealing with the disorientation of the body in isotropic space, when the brain attempts to interpret visual cues in an environment that looks the same in all directions.” Consisting of a set of embroidery hoops with a series of linear, spatial transformations embroidered in silk, each frame offers a porthole view of a transforming Euclidian geometric motif: the first view shows a parametric representation of a sphere; the second gives us a vantage of two hemispheres in stereographic projection; the third shows a toroidal representation of the gravitational singularity of a blackhole in spacetime as a continuous deformation of a celestial body’s spherical topology.

The embroidered line drawings on azure blue silk organza lamé also feature on the art deco future-vintage-style bifurcated pantsuit of the same fabric. Featuring a bias cut pieced with a stiff quilted winged yoke cut on the grain, the suit plays with these inherent structural features of dimensional transformation, and likewise features the the motifs of her studies of astro-physical phenomena that rhyme with tiered channel stitched rows encircling its semi-circular split-skirt. States is currently developing the costume based on her research of American National Recovery Act sewing patterns and futuristic 1930s garments. The film costume will act as a stewardess uniform for a performance with her collaborator Asia Bas who appeared as the protagonist character of her Frigidaire multi-universe (2009-. Embedded in a world of cinema, comic-books, and installation, stewardess Cura works for the fictitious Frigidaire airline and is stuck in a loop of unhealthy routines involving her vintage refrigerator. Acting as an extended metaphor for body dysmorphia, the anthropomorphic relationship with her Frigidaire culminates with her getting into the device, leading the film and comic book narratives to split into branching paths that translate into afterlife/time-travel.